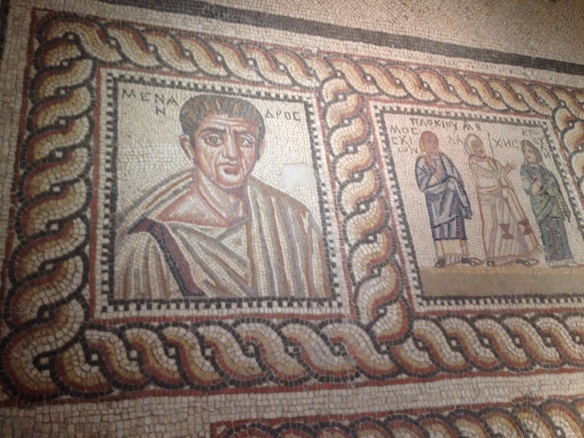 I’m thrilled! The future is here! The speculation of yesterday is the modus operandi of today!

Early on in my blogging life I pondered the loss of Menander’s comedies. How could the works of possibly the most influential comic writer in antiquity have all disappeared? They had for a thousand years or so. Then they were rediscovered on an Egyptian palimpsest early in the 20th Century. I mused whether a technique would ever be developed whereby ancient Christian texts could be examined for early writings hidden within without damaging the visible texts. What was the dilemma? Why Christian texts in particular? It has a lot to do with the censoring/destruction of pagan culture by the Byzantines when they embraced Christianity in the 4th Century AD. With papyrus being such a commodity, I speculated that it would be washed and reused.

Well, they’ve done it! A scientific technique has been employed. Archaeology (1) reports on archaeologists using modern technology to read ancient texts overwritten in the 8th Century AD at St Catherine’s monastery on Mt Sinai. Those Byzantine monks didn’t wash out the texts but scraped them off. Now there is a machine that can read what was there before. Ancient overwritten texts can now be recovered and transcribed for our edification.Who knows how many hitherto forgotten texts will reemerge. It’s very exiting.
Perhaps Menander’s work, his comic brilliance will reemerge in its original brilliance sooner than expected!!!!!

Coming up soon – Flaxen Stripes’n’Reedy Crowns, I begin to wind up my series of posts on making the Nemes Crown of the Pharaohs.