Paschal services (Christian Passover, Easter in the West) have a very long tradition. Some date back to the catacombs. In the early days of the Byzantine Empire church services were celebrated out and around the city. For the service of the Twelve Gospel Readings I imagine that there was twelve stops, “stations” if you like, within the city walls of Constantinople. I imagine the faithful walking reverently through the polis marking God’s earthly domain, the bishops blessing the city. I am reminded of the English practice of walking the boundaries of one’s property, thereby affirming its ownership.  In Jerusalem, we are told by an early witness that during Pentecost worship was made on the Mount of Olives where the Ascension had taken place, as well as the gates and on Mount Zion. (1) The early church in a similar way marked the boundaries of God’s Kingdom on Earth. Constantinople was considered the New Jerusalem, an earthly reflection through the watery sky above of that other Jerusalem, the one that always was.

The Epitaph, Christ’s Tomb, in procession through the streets of Adeliade on Good Friday

Christianity was not the first religion to use religious processions as part of their celebrations. The worship of the Olympian gods had processions too e.g., the Dionysia. Can we equate liturgical procession with the pageantry of the Festival of Dionysius? Did one replace the other? Early Christian witness attests to the taking down of a statue of Aphrodite from over the site of the exhumation of Christ’s cross.(2) A kind of juxtaposition of religious iconography was at play, if you allow, a kind of iconclasm. In Western Europe, the curious face of the Green Man stares out from the architecture of many Medieval Churches. Theirs was a more symbiotic relationship.

But who was he, this Green man, this man made of leaves who shared a coiffure with Dionysius, the ancient god of theatre? He makes me question what came first, the processions and supplication ceremonies or the characters that filled them? Did liturgical dramas of the Middle Ages evolve into the Mystery Cycle / Pageant Plays and onto cleared fields and marketplaces for the first time? Could the opposite be true? Could Medieval / Byzantine drama have grown from pagan practices and festivals and infiltrated the acceptable Christian Drama?

The Green Man, from Ludlow

When Christianity became the recognized religion of the Late Roman Empire, theatre practice changed drastically. Pagan theatrical practices were not tolerated and so drama disappeared. Gone were the pageants, the festivals, the Baccanalia and many, many plays. Others were just read and no longer enacted. Drama was to reemerge in churches at Easter. Through liturgical singing the three Marys visited the empty tomb while the priest represented the Archangel.(3) The purpose of liturgical dramas to follow was to teach the illiterate bible stories and their faith through parables. As time progressed the stories became more detailed. Stations for different scenes were performed around the inside of churches/cathedrals. Craft guilds were involved. They were each given a different station to build as a scene. They built literally, with hammer and nails. Guilds vied with each other for the best scene. Tumbling and horseplay infiltrated through the guise of larger than life characters e.g., Noah’s nagging wife and devils sent to taunt the protagonists. Finally these plays moved outside of the Church, onto wagons. They were stationary and their audiences moved to them. And they were mobile, moving to their audiences depending on the town that presented them. Once out of the Church, with the aid of the Commedia Dell’arte and the Renaissance, a new secular theatre arose. End of story. But is this the whole story?

What about the tradition of Mumming? The Green Man? Puppetry? Tumblers? Bards and Bears and dancers?
Disguise and re-birth/re-generation are apart of the traditions of the Mummers and the Green Man. They are also associated with carnival and pageantry of Medieval Europe. The mummers moved from house to house at Christmas in their festive disguises. The devils moved between stations and carts. In the same way that a very old figure like the Green Man could survive the Christian juggernaut, could these pagan characters have survived in the form of these devils? I believe that the Greek Karagiozis shadow puppet survived Islam through a name change and a change of form from Silenus in the flesh to Karagiozis in the shadow. Could this survival technique have also been employed in the West, preserving pagan entertainments in the form of puppets and the buffoonery of tumbling devils?
In France, glove puppets are seen in the illustrations in the Roman du bon roi Alexandre Manuscript by Jehan de Grise? These illustrations were made in 1344. Is the much loved French cudgel-bearing puppet Guignol present? Guignol is said to have evolved from from the Commedia Dell’arte’s Pulcinella, but could he have existed before? Their names are very different. The English character, Punch from Punch and Judy is also said to have evolved from Pulcinella, aka Punchinella. At least their names are similar and they carry a cudgel. Austria / Germany’s cudgel-bearer, Kaspar/Kasperle is also said to have evolved from Pulcinella. However there is a catch. Kaspar is believed to have been a character in the Medieval Mystery Cycles. He is believed to have represented one of the Three Wise Men.(4)
Could pagan characters like the Mummers and even the Green Man have survived the Christian white-wash over bawdy buffoonery in the guise of puppets like Guignol and Kasper? 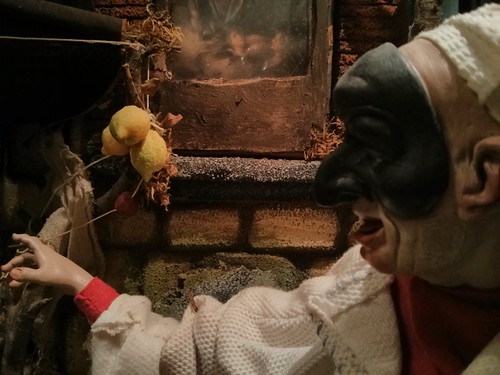